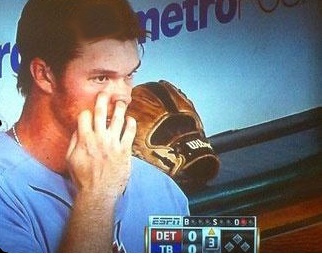 Cats With Bats is proud to present an exclusive(ish) interview with Twitter’s own (sort of) Fake Boesch! If you’d like to see more of him—sorry, no nude pics this time, guys—read on!

END_OF_DOCUMENT_TOKEN_TO_BE_REPLACED

Cats With Bats is excite to present an exclusive interview with our good friend, Not Ryan Raburn!

20 Questions With Not Ryan Raburn

END_OF_DOCUMENT_TOKEN_TO_BE_REPLACED

Cats With Bats is excite to present an exclusive interview with Twitter’s own Fake Leyland!

END_OF_DOCUMENT_TOKEN_TO_BE_REPLACED

Leyland: Hey, Raburn, you’re our starting second baseman now that that slug Sizemore is finally gone. [puffs on cigarette]
Raburn: Woohoo! Consistent playing time! Yay!
Leyland: On second thought, I think I’ll bench you again for no reason other than that I’m a dick.
Raburn: Oh.
Leyland: Wait, you have terrible numbers against Duensing and Andy Dirks is a better fielder, so I’m going to start you against Duensing and put you in left field again. The Twins won’t know what hit ’em!
Raburn: ……………………………

Basically, this is what happened in the last couple days.

Leyland must just be doing this to fuck with Raburn. He hates him and wants him off the team but DD is reluctant to just cut bait and eat his salary, so Leyland is engaging in an elaborate mindfuck with Raburn until his spirit is broken and he quits on his own.

This is cruel and unusual, Jim Leyland. CRUEL and UNUSUAL.

… what in blue blazes just happened.

Via beckjason, Tigers beat writer: Leyland on why Raburn over Boesch in LF: Raburn could then move to 2B if Dirks pinch-hit for Worth later.